If you’re a business-minded creator, you know it’s best to keep up with the latest news in our ever-growing field. The Webcomics business is still very much in it’s early stages, and while the technology-based media (like, say, PC Mag) will run articles on the latest-and-greatest webcomics out there, most of the country is still in the dark about the concept of a “webcomic”. It’s exciting to be ahead of the curve, but this is also a fast-paced roller coaster medium. Strap yourself in and keep both eyes forward, it’s amazing what you’ll miss if you’re not paying attention.

One Million on Kickstarter?!!!! 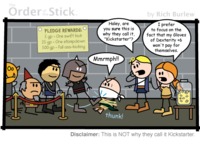 Thinking about using Kickstarter to get financial help to get your comic printer? How much do you think you’d need to do that? How’s ONE MILLION DOLLARS sound? Well, if your name is Rich Burlew and you make a popular comic called “Order of the Stick”, you got it.

“It turns out I had this huge geeky safety net out there that I didn’t know about this whole time, made up of people who have been reading my comic for nine years but never contacted me,” Burlew tells Comic Riffs shortly before the drive’s close.

Namco-Bandai says it’s gonna be sa-weet. Under the project name “ShiftyLook “, they will start converting over some of the old favorites, like “Sky Kid”, into a webcomic storyline. Could be cool, could be kinda cheesey. I fear a Tekkon comic packed with reality-show-type-drama amongst the characters, or forcing a bizarre story about ghosts running off with the Misses, into the simplistic Pac Man dynamic.

Hmmm.. yeah… not super optimistic about this venture. Let ’em prove me wrong. 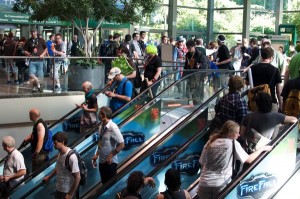 As many of your know, the granddaddy of the webcomics video game genre, Penny Arcade, now hosts their own dang comic con for comic-lovers as well as gamers. The main convention is in Seattle, but when PAX East came to Boston in 2010 and 2011, it left a gamer-sized thumbprint there– and now has announced a 10-year deal with the Massachusetts Convention Center Authority.

“We’re thrilled to host PAX East for at least 10 more years,” said James Rooney, executive director of the MCCA, in a news release. “Hosting an event for the next decade that draws gamers from around the globe to Boston is fantastic, but the international attention it brings to the incredible technological advancements coming out of the Commonwealth is a win‐win.”

What constitutes as stealing, for a mobile app?

It’s a debate going on currently– if you create an app for iphone/adroid/ipad, and use the comics from RSS feeds with some ads slapped on to earn money, is it stealing? You ARE earning money from other people’s products, so I would think so. Maybe not as offensive as selling books full of webcomics you swiped off the internet, but still. MTV Geek covers the story:

“The app was really just a highly specialized RSS reader. Most, if not all, of the comics have RSS feeds available. So how does this app differ from a regular RSS reader that a user could just select some webcomics on their own”

The app in question has been removed, but the idea isn’t a new one and it surely won’t be the last. What do you think of apps like these? Would they be giving your comic more exposure, or stealing your comic to make profit that you won’t ever see?

If You Enjoy Our Pick of the Week, Here’s Another One to Watch….

Comics Alliance (we realize you may be doing a double-take– but yes, we are the WEBcomic Alliance, but there’s another Alliance out there!) posts a weekly spotlight article called “Best Webcomics Ever (This Week)” which highlights some you may not have heard of. This week’s include the Confederate-Nazi-Post-WWII “Odessa”, the magically Potter-esque “Gunnerkrigg Court”, an Oatmeal alternative for pop-culture geekery “Rock, Paper, Cynic” plus more.

The Finalists are in!

If you spend any time on social media with other cartoonists, you may have heard about this one. The Washington Post has continued it’s annual “best of” contest to nominate and then vote for the best webcomics of the past year. March 7th the finalists were announced and the polls open to the internet to decide the winner. This year the leader in the voting has really taken off….. looks like the winner will be……..

Please, like I was gonna blurt it out right here.