Although this is not another video tutorial like in my usual Digital Techniques series, I figured now that I’ve show you my current process beginning to end, a little recap of the steps in article form may come in handy. Plus, what’s neater than seeing an animated GIF of the process start to finish. I’m always hypnotized by those. Let’s get started! I know the hardcore cartoonists who do things a“the right way” will slaughter me for this, but I do not jot down any loose comps/sketches or literally write my script prior to working on the final piece. My brainstorm process occurs on my commute home from work, in my car, with instrumental music playing (lyrics tend to distract me). In that 45 mins or so I am usually able to come up with the punchline, and map out the basic script, getting a good feel of how much space I’ll need to set aside for balloons and text. I wouldn’t suggest this process to anyone, as you can very easily forget what the joke was or how your phrased something, when you don’t write things down. Keeping a small notebook handy for moments of inspiration is recommended… And although I DO have my own little “idea” notebook, I never take my own advice. For whatever reason, I rarely ever forget my joke, and my scripts tend to be altered so much when adding copy, the initial script (in my head) is irrelevant. But again, that’s just me.

As you may already know, I work 100% digitally now, on a Gateway Convertible Tablet PC. This includes the sketch phase. I’m pretty loose, at first laying in simple shapes to compose each panel. Then, if I have the time or want to get some details fine-tuned, I’ll go in with another layer of sketching. I use a light gray 1 point brush in Illustrator, on the bottom layer I designated “sketch”. On a separate layer, I ink over the sketch with a 5 point calligraphy brush. This is where my Wacom-enabled Tablet PC comes in handy. Once you set the brush preferences to “pressure”, inking becomes very similar to using a brush or fountain pen; the harder you press down, the thicker the line! Some more tweaking of the paintbrush preferences (the fidelity in particular, I usually keep it set as low as possible) and I also have more control. Inking is my favorite part of the process. It’s more than “tracing” with my loose sketches. I’ve been known to get in fights with fans who call me a “tracer”! (“Chasing Amy” reference, wee!)

A layer between the sketch and the ink layers is used for color (or gray tones). For this is use a BIG 10 point calligraphy brush, to quickly lay in colors. It’s a lot like a coloring book at this point, very therapeutic. Recently, I don’t have much time for color, so I used gray tones, or even a halftone/ziptone dot pattern to add some character. However, in the past when Z&F was full-color, I would also go back in with highlights and/or shadows… Simply a lighter or darker version of the mid-tone color. This really makes the characters pop, but yes, full color does add at LEAST an hour to my process. Like I mentioned earlier, when drawing he comic, I keep I mind the basic space needed for each panel’s script. This skill is only learned by lots and LOTS of experience… And a lot of resizing and redrawing panels as the script was not going to come CLOSE to fitting in the space I left. This was a big pain in the butt when drawing with pen on paper, but obviously, resizing is a cinch digitally. Another reason why I do not spend the time composing & scripting prior… Though in some cases it may help, 9 times out of 10 I change things up anyway.
Typically, the text is typed up on the top layer, using 1 or 2 fonts. Usually, any more than that looks overdone and busy. Finding a font you like that blends with the art well, and includes a bold and italic version is key. I use “Digital Strip”, and for big sound effects, “Badaboom”. That’s pretty much it. Keep it simple! Once the text is laid out, the balloons are created on a layer beneath the text, using the rounded rectangle tool and the pen tool for the tails. I add a brush stroke to the balloons and tail that has a slight calligraphy element to it, to better blend with my artwork.

After those 5 steps, I make sure to tack on my signature, and save! I create a web-ready PNG file using save-for-web in Illustrator, at 900 pixels wide and 300 pixels tall (you can proportionally change the size in the save-for-web window)… And post to good ol’ WordPress/ComicPress!

As promised, an animated GIF just for fun! Gawk away. (I always do)

And, as a bonus, see the entire process in super-crazy-I-only-wish-I-could-draw-this-fast SPEED!
(warning: you may want to chug coffee with a chaser of Mountain Dew first to keep up ) 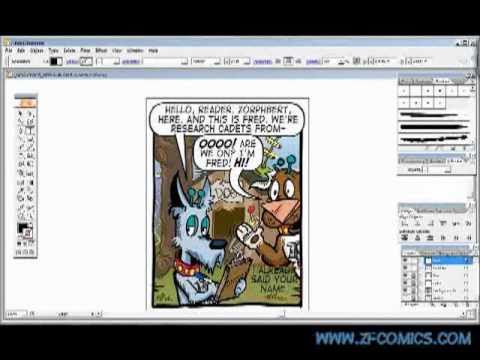