To Reboot or not to Reboot? So, everyone was all flustered (and often just seething with hatred out of jealousy, angst, disgust, or whatever the reason) about Tim Buckley’s decision to reboot his uber-popular comic CTRL+ALT+DELETE. He wanted a better way to tell the gaming stories and jokes, so he killed off his characters and is moving forward. So, the question is… although most of us agree with the “it’s your comic, do whatever you want” motto, at what point in your fame and fortune do you lose that perk? SHOULD you lose that perk? How much do you need to pander to your readers by hanging on to your characters (or even your comic itself), even when you feel the quality of your content has been suffering? Obviously, the less of a readership, the less of an outcry when you do something drastic… but when you make any little change to your comic with a large readership, the internet explodes.

Some input on his decision HERE.

The Hawkeye Initiative… to be hilarious/terrifying/awesome.

Another community project has reared it’s ugly, gender-defying, sexy lil’ head. You may recall recent discussions about the over-sexualization of women in Marvel/DC comic books taking over the interwebs, but something new has surfaced on Tumblr: The Hawkeye Initiative. The concept is simple: take a cover or image of a disproportionate heroine in a ridiculously sexy pose, and replace HER with HAWKEYE in the same disturbing pose. The result is so outlandishly silly, it makes you wonder why seeing women that way was accepted in the first place. Well, okay… we know why… lets not be dumb…. regardless, a project like this can be a great exercise, and a way to get your name some.. erm.. exposure.

Comic Book Resources covers the “online movement” HERE, as well as Bleeding Cool, HERE.But then there’s people like THIS who just seem to GET IT, complaining about the exact same issues women do, regarding over-sexualized female characters. Go figure. 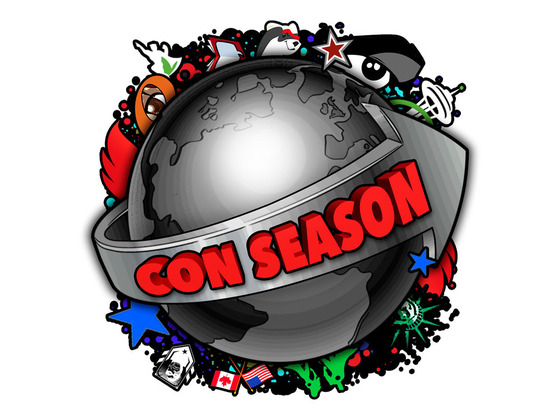 A new news round-up, a new KICKSTARTER to highlight. Many of us have already been bounced around the “con circuit”, even if in our own tri-state areas. Weekend after weekend, you can start to feel like a rock star– hotels, masses of people, rockin’ your table, and drinking/eating too much. So, why not (another) reality TV show documenting what it’s like to work the circuit during “con season”? Well, the guys at Blind Ferret/Least I could Do, want to make that happen.

“Simply put, Con Season is a documentary reality show that invites the viewers to all the shows Blind Ferret attends through-out the year. There’s tons of footage out there showing what cons are like, but nothing from the other side of the table. Cons are a world all their own with a wonderful, unique culture that we are proud to be a part of. What we’re doing is showing people what a convention is like from our point of view and giving them some insight from seasoned Con Vets. There’s panels, shenanigans, problems, fans galore, cosplay and regular Joe’s, after con parties, and especially, a more intimate and closer look at what it is Blind Ferret does.”

Webcomics eventually become print books, and printed comics will soon all be available to read digitally as well. Can we stop the stupid war now? There are 2 formats that work. Offer ’em both. But, take full advantage of each medium. As THIS ARTICLE by The Chicago Reader breaks down, digital comics can be so much more than simply comics in PDF format. Even old classics like Little Nemo in Slumberland  can be revamped and made interactive online (thanks, Google)… adding a whole new dimension. A scrolling, animated coverage of the 2012 Election found HERE got a lot of attention as well. Putting comics online is no longer ground-breaking, so is this the next step to make a bigger splash in the gigantic pool that is the internet?