It’s February which means a NEW Pick of the Month! As we ease into 2015, a new year full of new opportunities and resolutions, I wanted to select someone who is already on a roll, and colors outside the lines (figuratively, in this case) to help inspire us. This person is Carolyn Belefski, of Curls Studio. And she is so much more than her comic strip. She takes that next step and gets involved in her community, broadening her horizons, and that’s where a lot of us can learn from Carolyn. We can be so much more as cartoonists than the comic we draw.

I’ve had the pleasure of meeting Carolyn as she’s in the same “con circuit” as I, along the upper east coast. It’s always wonderful to see motivated and talented female artists (there’s only so many of us *smirk*) with their own comic books in Artist Alley, which is still a male-dominated arena. Based in our nation’s capital, Carolyn is active in local organizations like “Cartoonists Draw Blood” (Red Cross Blood Drive), and the Washington DC comics newspaper Magic Bullet. And when she’s not doing all that, plus her many published comics, she also freelances illustration and design work, which you can browse HERE.

There’s simply too much work Carolyn has produced over the years to give you a decent summary. So I will focus mainly on her ongoing webcomic, “Curls”.

A first impression of Curls is “cute”. Which, of course, is true. Carolyn’s style is sweet and simple, with a bold use of colors. The subject matter is equally “cute”, a collection of fun life moments as told by the main character Curls (based on Carolyn herself) and her lovable assortment of odd friends.

….But as you read a little more, you realize “cute” is just the bait. There’s a subtle depth, a celebration of eccentricities, that ties Curls up and give it a uniqueness that’s hard to find elsewhere. The end result is an adventurous and imaginative comic full of positivity.

“Slice of Life” just seems too… boringly realistic a category for this comic. Curls is more of an exercise in free-writing, or free-drawing I suppose. There’s plenty to relate to but each moment contains twice the amount of imagination. The adorable entourage Miss Curls spends her time with says it all: a turtle named “Turtle Neck”, a fighting fish named “Applause”, and a penguin with possibly my favorite name: “Pitter Patter”. And let’s not forget the most likely character to give you whiplash as you do a double-take:

Then there’s “Toast”, with that endearing jelly smile. He now exists as a plush Carolyn takes to shows and entices customers to wear like a mask for a picture.

Even with the cuteness and the positive eccentricity, Curls is also not shy about dabbling in pop-culture and fun references, like a Lady Gaga song intertwined with a fish’s fantasy sequence. There’s a little something for everyone!

And to properly fill out the archives, Curls will toss in a topical cartoon that speaks to Carolyn’s ties to the community and her fellow creators and artists.

My bet is anyone reading this POTM summary can relate to what this comic below conveys. 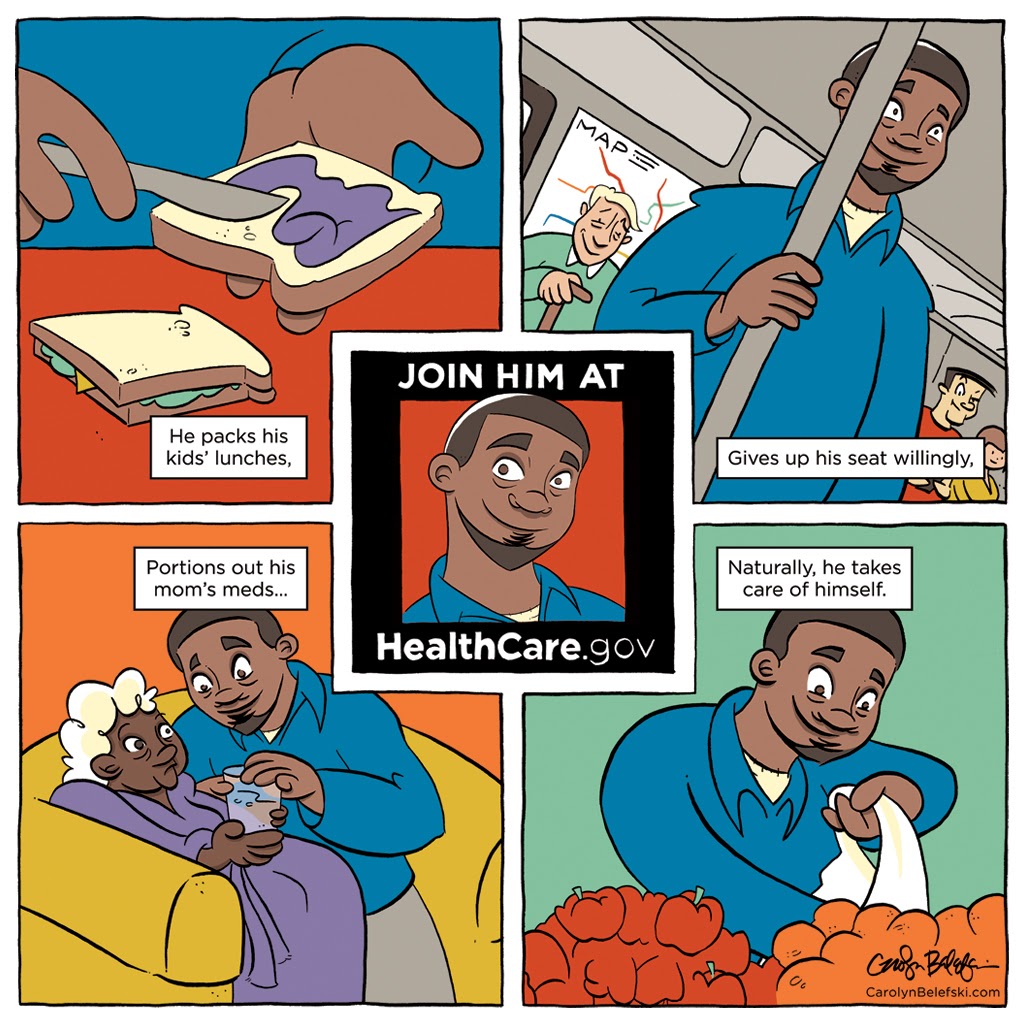 An example of Carolyn’s work for the White House!

Outside of the continuation of Curls, after a whopping 13 (!!!) years, Carolyn is making great strides in 2015 already! In keeping with “being more than her comic”, she landed a HUGE freelance project with the White House to help promote the Affordable Care Act and why healthcare and getting insured is important to every type of persona. Not everyone can say the First Lady laid eyes on their work and shared it! Also, it’s quite wonderful after all of our advancements, cartooning can still be a useful tool and even the White House can hire an illustrator (and a woman at that)! You can read about her entire process in this excellent write-up she did on her website, HERE. Join me in congratulating Carolyn on her fine work and accomplishments. As shared by the First Lady herself to promote the ACA and getting insured!

A little birdie told me that a Kickstarter is in the near future for Carolyn, so if you enjoy Curls and would love to see it printed in a full collection, keep an eye out for this campaign soon!